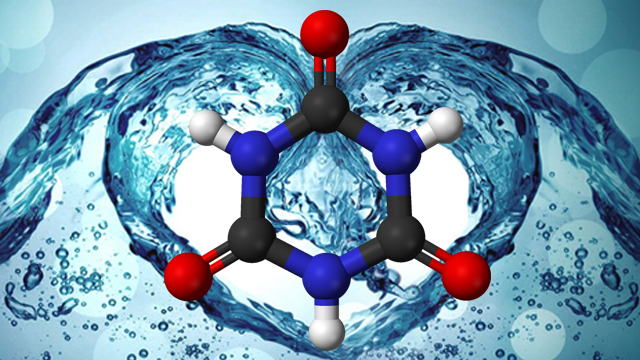 It takes a combination of chemicals to keep your pool clean and swimmable. You need something to sanitise your water, something to balance it, something to keep algae from forming, possibly something to control metal content, and maybe a couple more, depending on your location and pool type. But sometimes just adding a chemical isn’t enough. You also need to ensure that chemical can do its job properly by adding a sort of “assistant” chemical. One of those chemicals is cyanuric acid, also known as pool stabiliser. Its sole function is to stabilise the chlorine in your pool so the sanitiser lasts longer, thereby keeping your water clean longer.

But what exactly is it, and why do you need it to help chlorine do its job?

What is Cyanuric Acid?

Before you start pouring things into your pool just because we told you to, you’d probably like to know what exactly this stuff is, right? Let’s take you back to high school chemistry for a quick second, except this time no pop quizzes—we promise. 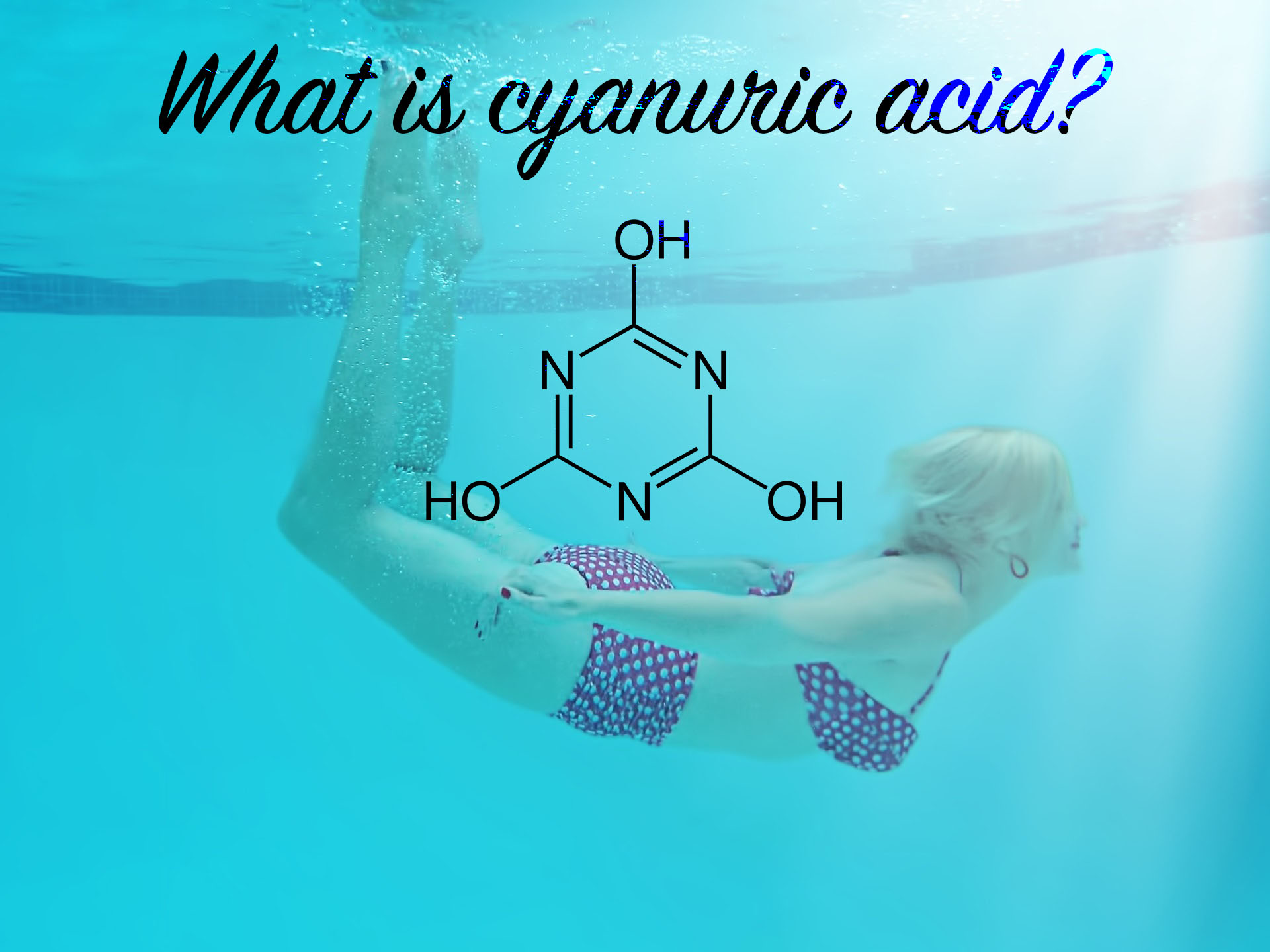 Cyanuric acid is a type of chemical compound called a triazine, which simply means it contains three nitrogen atoms and three carbon atoms. Other triazines include polyurethane resins, herbicides, and disinfectants. Cyanuric acid is a precursor to those, meaning what you put in your pool is not the same substance you use to kill dandelions in your driveway.

Cyanuric acid is sometimes abbreviated as CYA, and it’s also called pool stabiliser, pool conditioner, or chlorine stabiliser. Its sold in liquid or granule form. You can even get it mixed in with chlorine tablets or sticks, called trichlor, and in chlorine shock, called dichlor.

These combination products are referred to as stabilised chlorine (90% chlorine) because the stabiliser is mixed right in with the sanitiser, saving you the trouble of measuring and adding them separately. But continued use of 90% can lead to higher than optimal levels.

Why Use Cyanuric Acid? 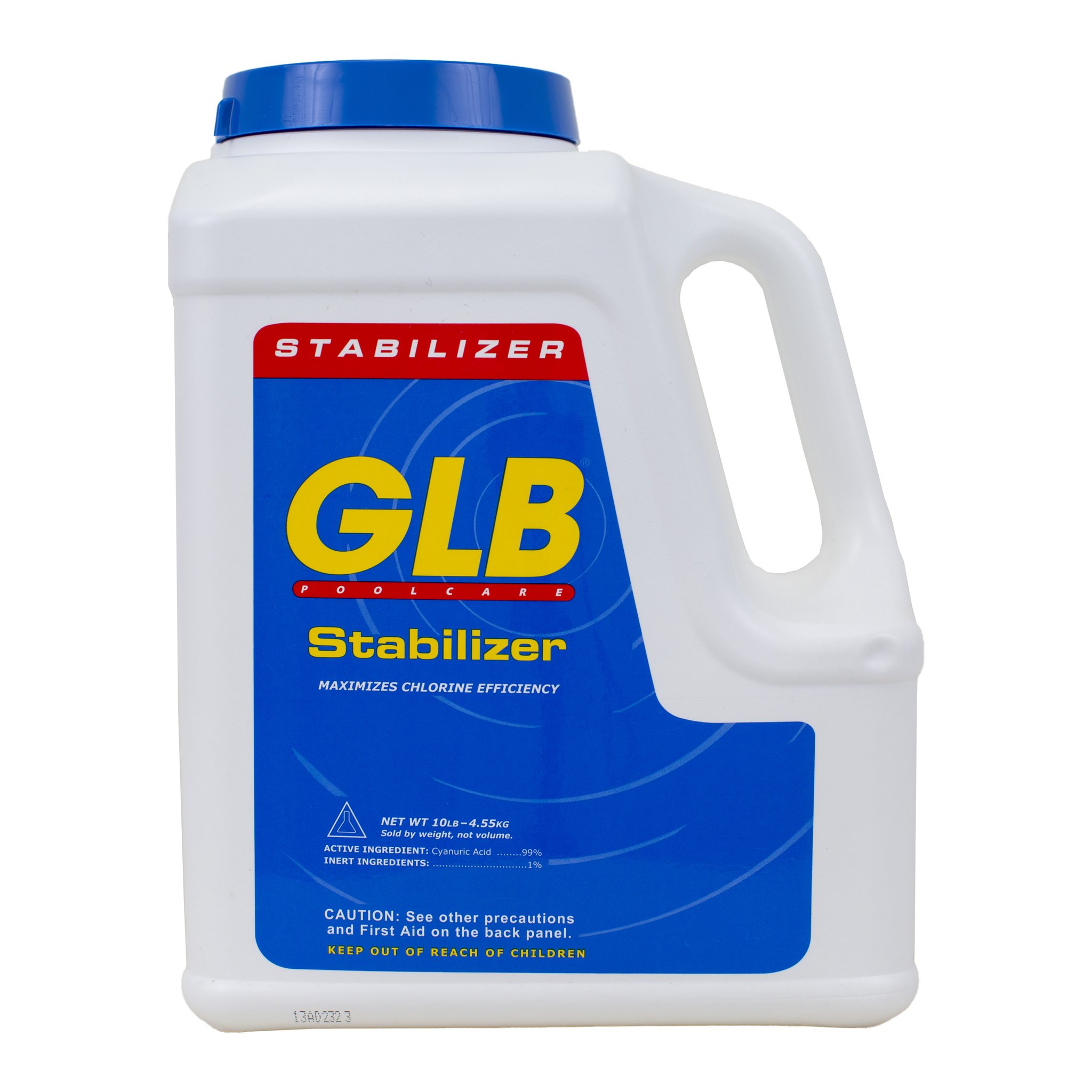 CYA plays an important role in your pool, but before you can fully appreciate what it does, you need to know a little bit about how the sun affects chlorine. Your pool contains three types of chlorine: total, free, and combined. Free chlorine is the amount of sanitiser available to clean your pool water. It’s present when you add chlorine directly to your water, or when it’s created by a salt water chlorinator.  Whichever way it gets there, it’s necessary for safe, sanitary swimming. Combined chlorine is the amount of sanitiser that’s been used up killing bacteria and other nasty stuff in your water. Total chlorine is, as the name suggests, the total amount of sanitiser in your pool—the sum of free and combined chlorine. When you put chlorine into your pool water, it transforms into sodium hypochlorite ions. When ultraviolet (UV) rays from the sun hit those ions, they break apart. The chlorine part evaporates, leaving very little free chlorine in your pool water.

In fact, within 17 minutes of exposure to UV rays, half of your free chlorine will be gone.

In addition, for chlorine to destroy contaminants for the same amount of time without CYA, you would need as much as eight times more chlorine than if you added CYA. Right there, adding cyanuric acid to your pool can save you a lot of money.

“Unless you want to take out a second mortgage to pay for truckloads of chlorine to add to your pool every hour, add some cyanuric acid to help you get a little more life out of your sanitiser.”

How Does Cyanuric Acid Work?

Pools with very low or no CYA will have significantly high chlorine demand. This is because un-stabilised chlorine is destroyed by UV rays very quickly. This leaves your pool vulnerable to contaminants unless you continually add more chlorine. Instead of making chlorine upkeep your full-time job, add cyanuric acid instead.

Better yet invest in an automatic chlorinator that adds chlorine to your pool by itself.

Once the chlorine in your pool water has transformed into sodium hypochlorite ions, the CYA binds to those ions, preventing them from breaking apart when exposed to UV rays. This is how it preserves your free chlorine and allows it to destroy bacteria three to five times longer than it would without cyanuric acid.That extra time is especially important because at the same time CYA stabilizes chlorine, the bond between cyanuric acid and sodium hypochlorite ions also hinders chlorine a bit. 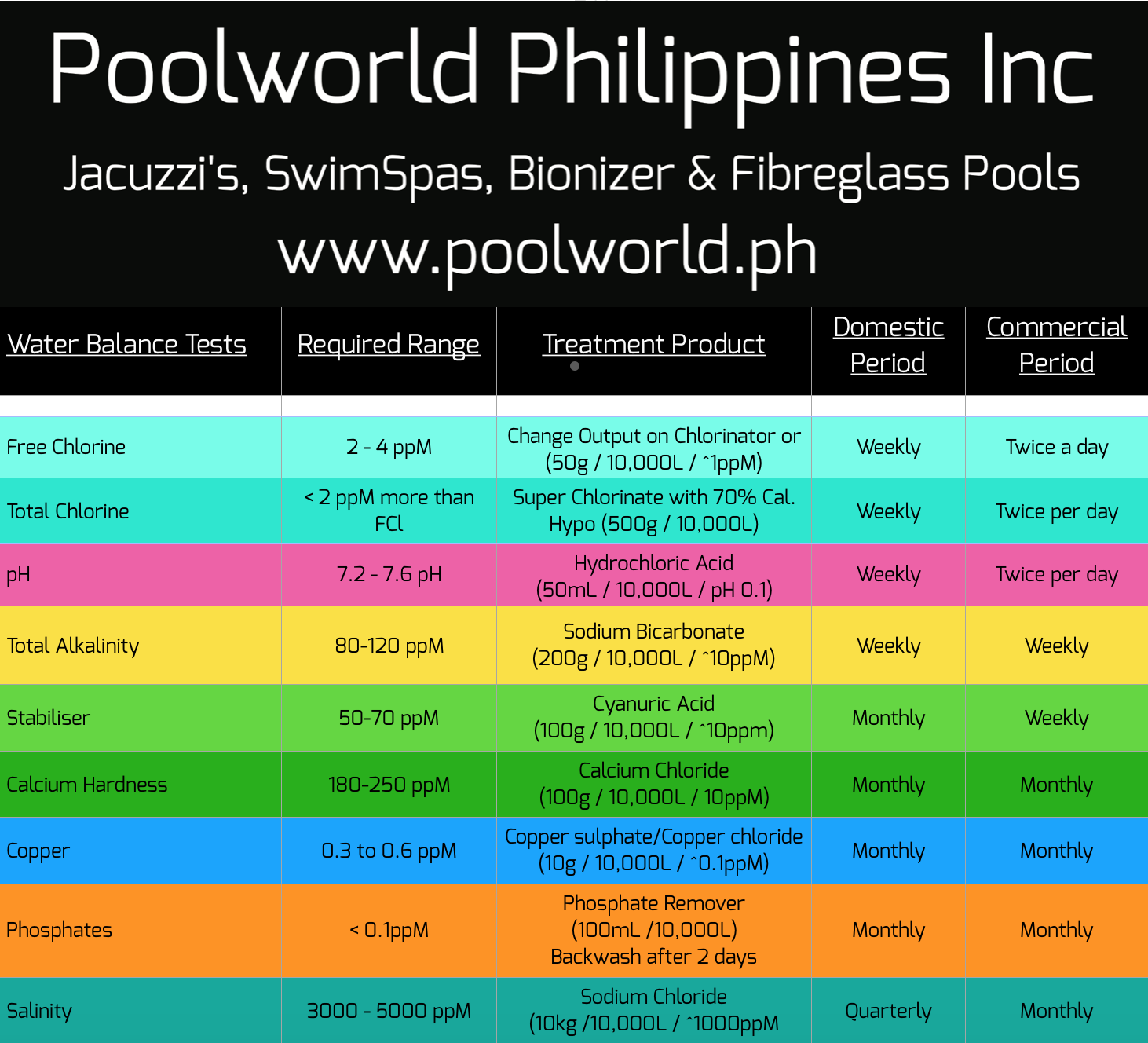 Even very small amounts of Cyanuric acid will help extend your chlorine lifespan in an outdoor pool. CYA is measured in parts per million, and a reading of 50 – 70 ppm is considered optimum.

All experts agree however, that when Cyanuric acid levels are too high, a phenomenon known as “Chlorine Lock” can occur, where your test kit will show no chlorine in the water, even though you have witnessed chlorine tablets dissolving, or have just shocked the pool. Generally, this occurs when CYA levels climb close to 100 ppm. Cyanuric acid levels should be maintained above 50 ppm and below 70 ppm. The higher your level of Cyanuric acid is, the less efficacy, or killing power your chlorine has. At CYA levels approaching 100 ppm, you will have superior protection from the sun, but your chlorine molecule becomes weaker due to the amount of CYA attachments or bonds being made.

How to Lower Cyanuric Acid Levels 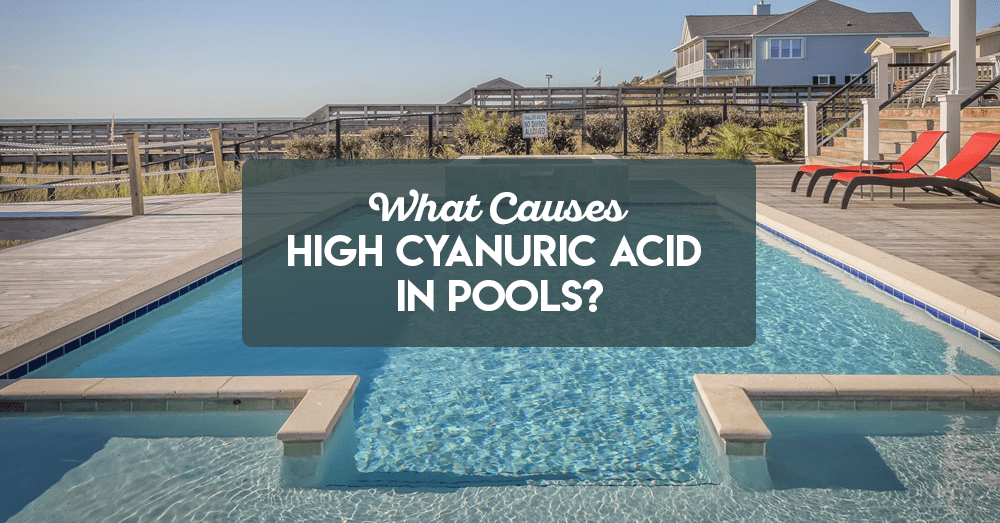 Levels are only reduced by dilution, which means to drain a portion of pool water and refill with water that has no, or very low levels of Cyanuric acid. There is no chemical available that will remove Cyanuric acid, and it does not deplete on its own. It will be reduced by dilution from rain, backwashing, splashout and lowering the water level for winter. If you drain out 20% of your pool, refill the pool, voila! your CYA level will be reduced by 20%.

Keep an Eye on Those Levels!

If you don’t measure the chemicals in your water frequently, it will be impossible to keep them properly balanced. Understanding basic pool chemistry is the first step, but creating a pool maintenance schedule (and sticking to it) is crucial. Feel free to click the picture below and download it for your own use at home or work! 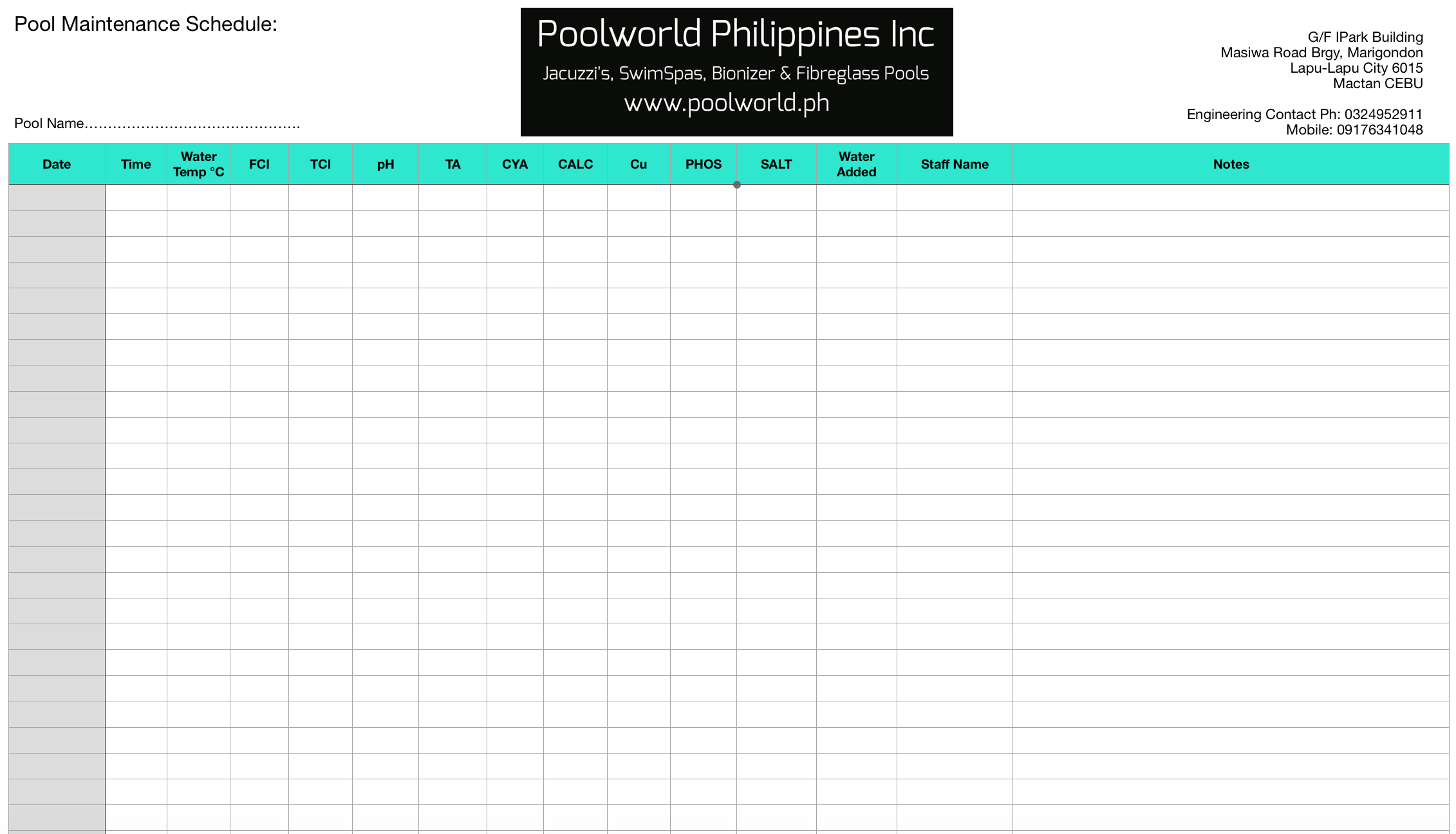 Using test strips to check your water chemistry every week is one of the simplest and most affordable ways to keep an eye on everything from pH, to free chlorine, to cyanuric acid levels. You can also use a liquid test kit or take a water sample to your local pool store.

“It’s smart to test your pool water weekly in a domestic situation and twice per day is recommended for commercial and resort pools. If you’re keeping your water chemistry balanced and you don’t have a lot of rain, you shouldn’t see much change in your cyanuric acid levels.”

How to Add Cyanuric Acid to Your Pool

If you’re using dichlor or trichlor sanitiser (stabilised chlorine), you probably won’t need to add any extra CYA to your pool water. Whenever you add either of those sanitisers, you get a little boost of cyanuric acid right along with them.

When using stabilised chlorine, you may notice cyanuric acid levels creeping up over time, and 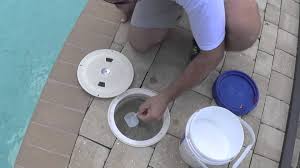 need to reduce the CYA. If you wish to avoid that problem, you can use chlorine that is not stabilised and add the CYA separately so you have a little more control over it.

“You’ll be happy to know that if you’re adding cyanuric acid to your pool separately from your chlorine, you may only need to add it once or twice per year.”

Check the label for correct dosages, but to help you buy enough to do the job, here is a quick formula. Add 100g per 10,000L to raise the level by 10ppM For example, when refilling a 100,000 Litres pool, you need 5kg of granular Cyanuric acid to get a reading of 50ppM. Test your CYA levels every few months. Over time, you will likely need to add booster treatments to maintain the residual. A few grams per year is common, but be sure to test your CYA levels first, and not add more blindly.

After pouring the chemical into the bucket of water, leave it to dissolve. Once the cyanuric acid is fully dissolved, you can safely pour the contents of the bucket SLOWLY through the skimmer with the pump running. It is a good idea to backwash your filter before doing this as some of the stabiliser will slowly dissolve inside the sand filter. Run your pool pump for at least a few hours after. Letting the pump run is like stirring the solution into your pool, just without having to use an enormous spoon.